How Does It Feel to Be Shocked by Electricity? 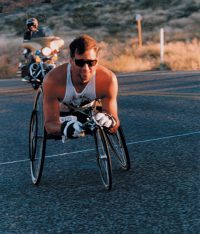 At 16, Curt Brinkman knew climbing a power pole was dangerous. He just didn’t realize how dangerous.

On a sunny day in Shelley, Idaho, in 1970, Curt was working on a farm and climbed a power pole for fun. He got perilously close to a 36,000-volt power line. The electric shock stopped his heart, and his lifeless body plummeted to the ground. Fortunately, the impact of the fall started his heart beating once again.

Curt was so badly burned that doctors were forced to amputate both legs above the knee. Before the accident, he had been a 6’7″ tall athlete with dreams of playing professional basketball. After five months in the hospital and two months of rehabilitation, Curt turned his ambitions elsewhere.

Curt organized and began competing in wheelchair marathons, setting many world records and winning eight Paralympic medals and countless other medals. In 1980, he won the Wheelchair Division of the Boston Marathon in 1 hour and 55 minutes—the first wheelchair athlete to break the 2-hour barrier.

Prior to his death in 2010, Curt was an educator, a motivational speaker, and author of the best-selling books, The Will to Win and Still Winning/Lessons for Life.

Why Call Before You Dig? 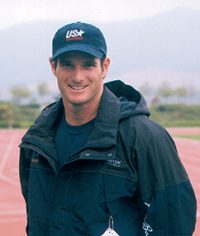 The electricity traveled instantly through his whole body, burning him as it went. Cliff’s heart stopped immediately, but a firefighter did CPR (cardiopulmonary resuscitation) and revived him. He spent the next several months in the hospital while his body healed from the terrible burns.

“I had such extensive injuries that the doctors said they would have to amputate my legs,” Cliff says. Fortunately, a doctor was able to save his legs with a special operation.

Before his accident, Cliff had been a runner. “I was heartbroken because they said I wouldn’t walk again. I finally had to admit that I couldn’t be a runner.” But Cliff didn’t give up. He worked hard to build his strength and eventually was able to walk, though he has to wear heavy braces on his legs.

As part of his rehabilitation, Cliff began to canoe and kayak and became one of the best kayakers in the world. He competed at the 1996 Olympic Games in Atlanta, Georgia, and again at the 2000 Olympics in Sydney, Australia, where he was the flag bearer for the United States team.

“The accident changed the person I am. It made me a stronger person mentally and physically. I don’t think I would have had the will and determination to make it to the Olympics without going through an experience like this,” Cliff says. “But I have enormous physical limitations. The damage is done, and there’s no coming back from that.”

In 2001, Carissa from Petaluma, California, was struck by lightning. She was just 15, and she was very lucky. 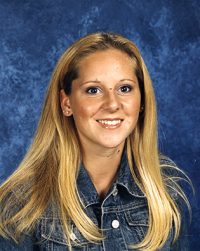 “It was raining,” Carissa remembers. “I was in my high school parking lot about to get into my mom’s car. I had just closed my umbrella. All of a sudden, I saw a bright light, and I felt lightning go through my body. I got extremely warm and started shaking. My mom saw the whole thing. She said I just lit up.”

“The umbrella conducted the lightning into my arm. The metal tip at the top of the umbrella got indented and burnt. My arm got tingly, sore, and weak. I had some nerve damage in my arm, and I needed physical therapy to get it working right again.”

“I consider myself really lucky to be alive and okay. If it’s storming, I don’t go out in the thunder and lightning anymore. I don’t want it to happen again.”

Report to Your Class

< Back to Electrical Safety-SMART!
Page load link
Go to Top