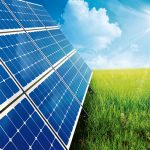 Solar power is generated when special panels of solar cells, or modules, capture sunlight and convert it directly into electricity. These panels are known as photovoltaic, or PV. (Photo is Greek for light, and voltaic pertains to electricity.)

Several PV panels can be grouped into solar arrays, and large numbers of these can be used to create a solar power plant. The electricity produced by solar panels can be used right away, fed into the power grid for others to use, or stored in a battery so it is also available on cloudy days.

Solar thin films are light-absorbing materials that are rolled, sprayed, or painted onto rooftops and other surfaces. Thin films are cheaper to make than traditional solar cells, but they are not yet as efficient at producing electricity. 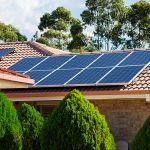 Thermal solar power uses mirrors or panels containing tiny tubes filled with water that absorb heat from the sun. On rooftops, they can supply hot water for individual buildings. Concentrated solar power can also be used to create steam that spins turbines at electric power plants.

Every day, more solar energy falls to the earth than all the people on earth could use in 27 years! 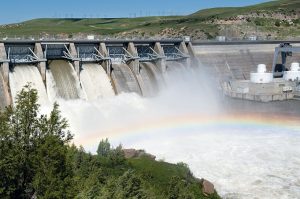 Traditional hydropower changes a body of water so that the water’s flow can be used to generate electricity. For example, a dam may be built on a river to trap the water so it can be released through a turbine to generate electricity. Or, water can be pumped from a lower reservoir to a higher reservoir, and stored there. When it is needed, it flows down through a turbine for electricity generation. Most traditional hydropower facilities are found in hilly or mountainous areas.

Ocean energy is another form of harnessing the temperature and movement of water to create energy. Oceans cover more than 70% of the earth’s surface, making them the world’s largest solar collectors. The ocean stores thermal (heat) energy, which can be used to generate electricity using special turbine generators. 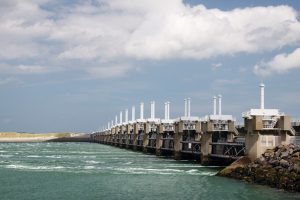 The energy of the ocean’s waves and tides can also be used to generate electricity with dams that force ocean water through turbines. This is called tidal energy, or wave energy. The world’s first wave power station is on the Scottish island of Islay. It generates enough electricity for about 400 homes. Wave energy uses buoys or other mechanisms embedded with turbines to create electricity as they shift with the movement of waves. The world’s first wave power station was built on the Scottish island of Islay. Other wave power stations are located in Mutriku Bay, Spain; Jaffa Port, Israel; Kaneohe Bay near Oahu, Hawaii; and Cobscook Bay on the East Coast of the United States near Eastbrook, Maine.

Scientists and engineers around the world are working on systems to use the ocean’s energy on a large scale.

Fifteen miles off Florida’s Atlantic coast, the world’s most powerful sustained ocean current—the Gulf Stream—moves at nearly 8.5 billion gallons per second. Researchers estimate the current could someday be used to drive thousands of underwater turbines, producing as much energy as perhaps 10 nuclear plants and supplying one-third of Florida’s electricity.

Geothermal energy comes from steam (or hot water that has been converted to steam) from deep inside the earth. The word geothermal comes from the Greek words geo for earth, and therme for heat. So geothermal means “earth heat.” 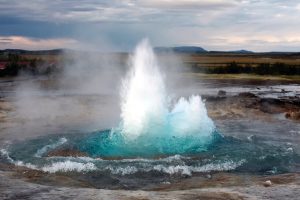 Our planet’s interior is very hot—at its core, 4,000 miles deep, temperatures may reach over 9,000°F. This heat is continuously conducted from the earth’s core to the surrounding layer of rock, the mantle.

There are some places around the earth where magma (hot molten earth from the mantle) pushes up through cracks into the crust near the earth’s surface. Magma can heat nearby rock and water as hot as 700°F. Some of this hot water reaches the earth’s surface as hot springs or geysers, and some stays trapped deep underground in cracks and porous rocks. This hot water can be used directly or converted into steam to turn turbines that generate electricity at geothermal power plants.

Besides hot spring bathing, heating of individual buildings and of entire cities is the oldest and most common direct use of natural hot water. In Klamath Falls, Oregon, which has one of the largest city geothermal heating systems in the United States, geothermal water is also piped under roads and sidewalks to keep them from icing over in freezing weather. The city could not afford to use any other method to keep hot water running continuously through cold pipes! 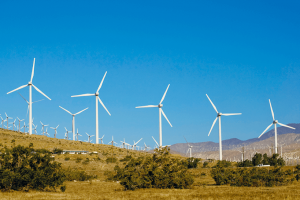 Wind power is one of the world’s fastest-growing sources of renewable energy. It uses the force of the wind to spin turbines. These spinning turbines generate electricity. Most wind power is produced at wind farms, which are large groups of turbines in consistently windy locations. A very large wind farm can generate enough electricity for all the homes in a city of about one million people.

Small wind turbines can be used for individual homes, businesses, and boats. They can be used to pump water, or the electricity can be stored in large batteries for use at another time.

Wind energy is a rapidly growing alternative energy resource and could generate as much as 35% of our nation’s electricity by 2050. If this occurs, a cumulative total of 12,300 million of greenhouse gas emissions would be avoided.

Biomass is organic matter, such as agricultural and animal waste, that is collected to create energy in the form of electricity, heat, steam, and fuels. Biomass can be burned in an incinerator to heat water to make steam, which turns a turbine to make electricity. It can also be converted into a liquid or gas, which can be burned to do the same thing. 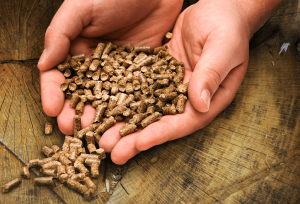 Biomass includes energy crops like wood, grains, kelp, and beets grown primarily for use as a fuel. Energy crops are renewable, but some, like trees, take a long time to grow. For example, farmers can grow trees on some of their land instead of wheat or other kinds of food. The wood is harvested regularly, cut into small chips, and burned to provide heat or run small electric power plants.

Another type of biomass is methane gas, a by-product of decay in landfills. As garbage rots in the ground, it gives off gases that can be collected and burned to produce heat. These gases can also be burned to heat water into steam, which can be used to turn a turbine and generate electricity.

Before the Industrial Revolution, humans relied on biomass in the form of wood for nearly all their energy needs. Today, biomass provides about 10% of the world’s primary energy supply, mostly in the form of fuels burned for cooking and heating in developing countries. Use of biomass for electricity generation is growing rapidly and currently supplies about 1.6% of the world’s electricity demand.

Try these exciting activities and experiments:

Where in the World Is Geothermal Energy? Activity

< Back to Sustainability-SMART!
Onward to the Next Section! >
Page load link
Go to Top